The contest will take place on a 195’ long ramp in the Midway display area at the track.  The riders will drop in off a 26’ high ramp and perform tricks on three separate jumps. 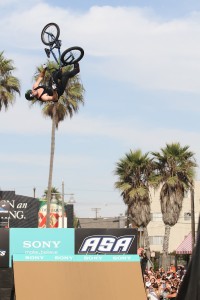 A qualifying round competition to determine the seeding for the event will be held on Saturday, November 16, at 2:00 p.m. EST with the nationally-televised Finals to take place Sunday, November 17, at 11:00 a.m. EST. The field of talent in this exciting head-to-head contest includes the biggest names in action sports.  Thirteen time X Games medalist Ryan Nyquist, eight-time X Games medalist Scotty Cranmer, Dew Cup Champions Kyle Baldock and Ryan Guettler and Big Air champions Zack Warden, Pat Casey and Colton Satterfield are among the top ranked professionals scheduled to participate.  Known in the BMX world as the veritable “who’s who,” these riders will be competing at Homestead-Miami Speedway for the first time.

“We are always focused on delivering value to our guests,” said Homestead-Miami Speedway President Matthew Becherer.  “This event will deliver value in a big way. Sunday’s competition will make for a great pair of finales for our fans.”

“Linking action sports and NASCAR forms a powerful combination with two passionate and loyal fan bases that will bring a new youth driven energy to the final event of the 2013 Chase for The Sprint Cup,” said Rick Bratman, chief executive officer of ASA Entertainment and producer of the ASA Big Air Triples. “Spectators attending the race will see huge stunts and mind-boggling tricks from the world’s top pros like something directly out of a video game.”

The event will be telecast nationally on Fox Sports Net (FSN) on Sunday, December 22, on a tape delayed basis. November’s competition will mark the Miami market debut for the ASA Big Air Triples tour that’s now in its seventh season.

ASA Big Air Triples is the first series of its kind, combining the best of dirt jumping, box jumping, half-pipe and park course disciplines into a unique head-to-head competition. The world’s top BMX and skateboard pros showcase their versatility and innovation over a one-of-a-kind 195’ long course that features a 26’ high roll-in, two large box jumps and a 14’ high quarter pipe. It is universally considered one of the most progressive and cutting-edge action sports series by both pros and fans, and is spectacular to watch. For more information, visit www.BigAirTriples.com.

The Speedway has been open since 1995 following an initiative to spur economic recovery in the aftermath of Hurricane Andrew.  The 650-acre facility is active more than 280 days per year and will host NASCAR’s championship races during Ford Championship Weekend (November 15-17, 2013) for the 12th consecutive year.  The NASCAR Sprint Cup Series championship Ford EcoBoost 400 is broadcast live on TV and radio to 175 countries in 24 languages.  Homestead-Miami Speedway, featuring a 1.5-mile oval and 2.21-mile road course, generates more than $250 million annually for the region.