On Thursday afternoon in New York City, Times Square was treated to something altogether different from The Naked Cowboy: the Air In The Square MegaRamp ASA Triples event. Yes, a BMX contest, running North to South along Broadway between 42nd and 43rd Street.

Placing first in the event was Salt Lake City via Idaho dirt, park and MegaRamp rider Colton Satterfield, who rode consistent throughout the day, and took home his first major win as a pro. “I did a bar barspin back barspin to tuck no-hander today, among other things. But that one made me stoked for sure,” said Satterfield. It was a new move for Satterfield, who also threw out huge 360 flips, and his helmet to the crowd once results were announced. 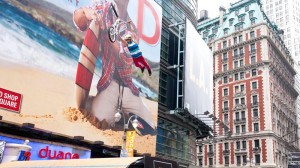 Satterfield, who’s been on the BMX comp tour circuit on his own dime, said the win could help him pay off some mounting travel bills.

Placing second behind Satterfield was 16-year-old rookie pro Pat Casey, who impressed the judges throughout the day with nosedive 360s, 720s and his ability to boost the ASA Triple ramps. In third, closely behind Casey, was DK Bicycles’ Brett Banasiewicz, now a vested pro on the BMX comp circuit.

The event, produced by MSG Action Sports in partnership with ASA Entertainment, was held in conjunction with the official launch of MSG Action Sports, a division of MSG Sports that will produce a variety of action sports and lifestyle events, properties and television programming.

The ramp, specific to the MegaRamp ASA Triples contest, consisted of a 195-foot long scaled down version of the X Games MegaRamp, with an extra jump thrown in, designed to place a greater emphasis on horizontal air than vertical air. Despite being a product of MegaRamp, the ramp was nowhere near the size of a MegaRamp, with jump gaps no longer than 15-feet each.

But it did bring out some aspects of recent MegaRamp competition, including last week’sMegaRamp Championships at Woodward West, which Satterfield competed in and placed fourth. “This was way different from MegaRamp,” said Satterfield.

Additionally, James Foster, who placed third at Woodward last week, unveiled new tricks that had learned on the MegaRamp, including the double backflip. “I learned those on a bigger ramp, and was getting them consistent, so I figured that I could bring them to a smaller ramp as long as I know where I am during the flips,” said Foster.

Foster landed five successful double backflips during the head-to-head battle format of the MegaRamp ASA Triples event, and kept the crowd on its toes throughout the afternoon.

And it may not have been on the same scale as an actual MegaRamp, but new MegaRamp experience did present itself throughout the day.

MSG Action Sports and ASA Entertainment will also produce a one-hour television show on Air in the Square that will premiere on Fox Sports Net on Friday, July 22 at 5:00 p.m. ET. The participating pros will serve as narrators of the docu-drama style show, telling the behind the scenes stories of the event in their own words, and providing viewers unique insight into their personalities, part of what makes action sports so compelling to watch.

The Naked Cowboy will reportedly not be included in the show.