The second stop of the ASA Action Sports World Tour (ASA ASWT) had as many thrills and spills and unexpected twists and turns as a NASCAR race when the first Skateboard Vert and Big Air BMX Triples contests of the season took place at Target Center in Minneapolis. 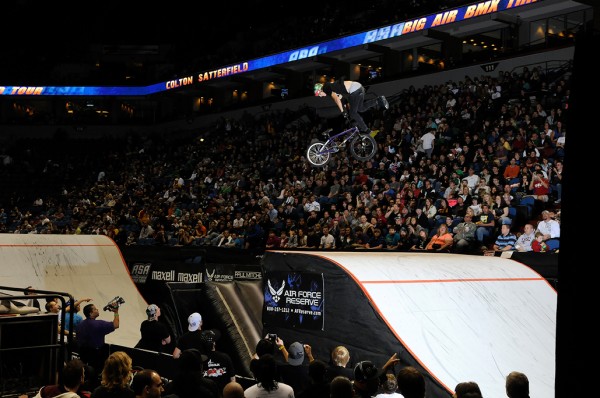 In Big Air BMX Triples the competition was intense right from the start. The degree of difficulty displayed in the early rounds of the head-to-head format challenged the men to push themselves harder than expected, resulting in more risk and yet, also more rewards. The contest began minus one competitor, hometown rider Tom Haugen, who took a nasty spill during the warm-up practice session, resulting in his opponent’s, Daniel Dhers ‘ (Caracas, Brazil), automatic advancement to the semi-finals. Dhers was seeded second and expected to be a finalist, but in the semi-finals Dhers’ too suffered a contest-ending mishap, allowing his match-up, Guettler, to advance. In the finals, TJ Ellis (Moreno Valley, Calif.), Ryan Guettlerand Rob Darden (Greenville, NC) had two runs each to prove their worthiness.

Ellis captured the crowd’s vote with the double back flip, triple tailwhip combination he executed in his first run, but Guettler’s 1080 to double tailwhip received the judge’s nod and the gold medal. Guettler had recently lost to Ellis when each had previously performed the same run of tricks, but tonight Guettler’s execution prevailed.

“I thought I had lost,” said Guettler in shock after his win. “I thought he had beaten me again after hearing the crowd’s reaction. I knew I was going to have to step it up in my last run. But, I choked and had to rely on my first run, and tonight it was enough. ” Ellis finished in second and Darden landed in third.