Chicago is the hometown of ASA Action Sports World Tour veteran Koji Kraft, and this event was one of the first times Koji has had the opportunity to ride a major contest in front of his hometown crowd. 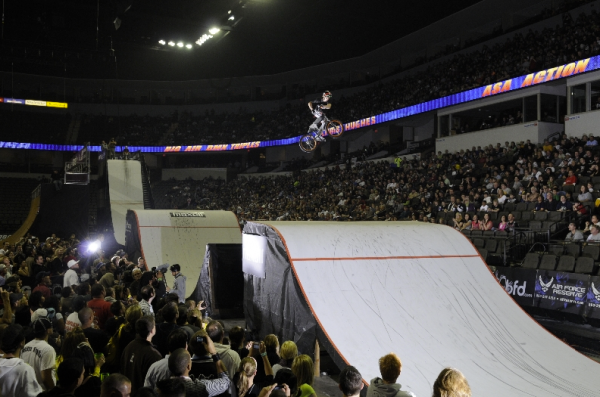 Koji’s combination of park and vert skills lend well to the BMX Triples course, and while he’s done well in previous events, a podium finish was eluding him. Another Illinois native, Zack Warden was also on the bill, hailing from O’Fallon. Zack also has the park and vert skills in his favor, and has done well at Triples events in the past. Despite recovering from recent ankle surgery, Zack has been riding the course remarkably well. Both riders would make it out of the Quarterfinal to be pitted against each other in the Semifinal.

Two riders we’ve not seen before in the BMX Triples events are dirt jumpers James Foster and Cory Nastazio. Both riders have some huge tricks in their bags, and were pitted against each other in the first round. Nasty came out swinging with two go-for-broke runs that included a flipwhip and a 360 flip, but bobbles on the landings led to issues with the quarterpipe (which counts for 1/3 of a riders score). Foster threw down a triple whip over the second set and cemented his path to the Semifinal.

The local boys continued to be the focus into the Semi’s as they set to battle each other. Koji wasn’t going to let Zack off easy, and a run that included a decade air on the second jump as well as a double tailwhip on the quarterpipe was enough to send Zack Warden packing. Other highlights of the Semifinal included Rob Darden taking down Anthony Napolitan and TJ Ellis taking out James Foster.

The final round pitted Rob Darden and TJ Ellis against the hometown favorite Koji Kraft. In the first runs Darden and Kraft both put out excellent runs. Darden’s included back-to-back 720s and Kraft had a double whip over the second set straight into a double whip on the quarter. Ellis threw out a huge run of a 360 double tailwhip on the first set, followed by a no-handed frontflip on the second set, straight into a double tailwhip on the quarterpipe. Ellis’ led after the first run and Darden and Kraft both tried to step things up. Darden tried to add in flipwhip to his run, but sketched the landing, which ended things early. Koji came out swinging, attempting a double backflip on the second set, but he came up just a hair short and went down. With that, Ellis had won. Koji’s first podium finish in BMX Triples came in front of the hometown crowd as he took second, and Rob Darden walked away with another Triples medal in third.

Music performance by The Used.