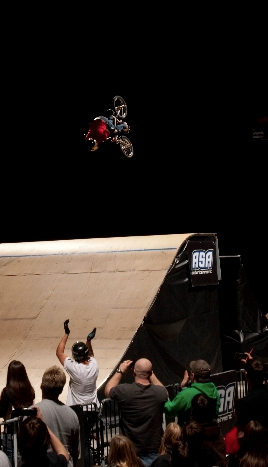 The first event of the Triples season was at the Northern Ilinios University Convocation Center in Dekalb, IL. X Games 2009 BMX Park gold medalist Scotty Cranmer came out on top of the heap with killer moves to beat one of his idols and toughest competitors, Ryan Nyquist.

“Nyquist is a legend – like Michael Jordan to me. I may have won, but we both did great runs,” said Cranmer. “I’m super pumped to win though, and excited for the next event.”

The twelve-man field, which consisted of several X Games gold medalists, world champions and former Triples champions, was separated into two-man battles with the best man in each pairing advancing to the next round. Cranmer advanced to the finals as the winner of each of his battles, but Nyquist made his way to the finals via a new feature added to the Triples script in 2010 – the Battle Back Round.

Nyquist bested Colton Satterfield (Salt Lake City, Utah) in Round One to advance to the quarterfinals where he met Daniel Dhers (Caracas, Venezuela). Dhers’ technique and style moved him past Nyquist into the semifinals, and sent Nyquist to the Battle Back Round.

“That [Battle Back Round] is a lot of work. I kept having to ride and ride – I was getting out of breath,” said Nyquist. “But when I made it to the semis and then the finals, the hard work was worth it.  Scotty made me to do tricks I hadn’t done in two years.  I would see what he was doing and think, ‘What am I going to do?’, then just pull tricks out of thin air. That’s what makes this event so cool. You’ve got to keep pushing. He did.”